All these posts about my daughter learning how to drive has made me nostalgic for the times when I wasn’t filled with so much anxiety that I could feel my heart skipping and also a time when my hair mostly stayed on my head.

Over the weekend we surprised my 16-year old with a car. Her first car is a 2009 Toyota Corolla with 20k less miles than mine and has a sunroof and is in really nice shape and this sucks. My car is a giant piece of crap. I’ve just decided she can have mine because my jealousy can be overwhelming.

But it’s not my decision because my dad got her this car.

This was nice because now I don’t have to buy her one and can focus my money-spending habits on more important things like downloadable content for Call of Duty.

Priorities, people. The game has ZOMBIES.

Back to the car.

My dad also bought me my first few cars when I was younger. However, not all the vehicles were as nice as the one he got my daughter.

My very first car was a 1970 Oldsmobile 442 with 500 horsepower and the ability to attract loose women in denim jackets from miles around just through the sound of the exhaust and the strong odor of the Armor_All I used to shine the vinyl seats. It was an amazing machine that was fantastic for driving short distances because it got roughly 2 miles per gallon.

We came home with a Vette. 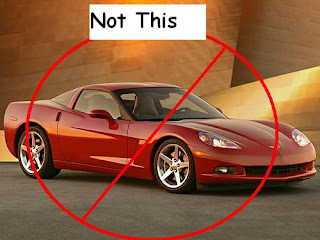 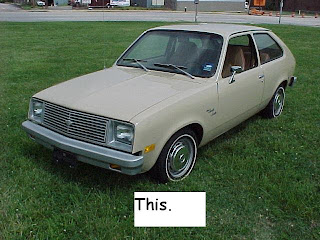 If you’re fairly young, and not familiar with the Chevy Chevette, think of it as a skateboard, about the same size with roughly less pickup and a hideous metal enclosure for shelter.

Compared to a skateboard, though, it had much worse reliability.

My Chevette was a short, silver number…with an all red vinyl interior.

About a month or so into ownership of this beauty, I began to realize the trouble this little hunk of crap was going to cause me.

You see, I live in New England, where it tends to get cold. Very cold.

This is unfortunate if your car’s interior is basically plastic…as anything heavier than a sponge sitting on said frozen red vinyl tends to cause cracks and tears and San Andreas-sized fault lines across your seats and dashboard. In older actors these are called “character lines” but in small crappy cars these are called “serious design flaws.”

The cold mornings are also unfortunate if your car doesn’t like to (a) start in the cold, or (b) continue to run in the cold.

In order to start my car in the morning, I needed to keep the thing revved at or near the redline. In a Chevette, the redline is roughly the idle speed of a normal car.

So every morning when the temperature dipped below, say, 70 degrees, I would sit in my car with my foot to the floor in an attempt to keep it running.

The problem is that when it’s 5 degrees outside, you don’t actually want to SIT in the car doing this.

It’s hard enough seeing my tiny testicles as it is…I don’t need the added shrinkage factor to add to my self-esteem issues. 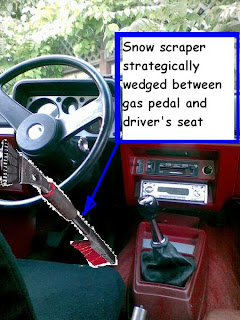 To sidestep the issue of sitting in a freezing car in order to warm it up, I’d instead take a car ice-scraper (for those of you in the Southern states, this is basically a giant barbecue spatula we use up here for carving ice off of our cars), and extend it to about three feet. After starting my car, I would take said scraper and wedge it between the gas pedal and my driver’s seat…thus flooring the accelerator and allowing me to get back inside the house, where I would run my entire body under a pot of coffee in an attempt to get my circulation started again.

Adding insult to injury was the fact that even with the car running, and sometimes actually DRIVING, it would sometimes decide it just wanted to stop.

The first time I ran into this fun little problem – where my car spontaneously decided it had enough of driving for one day – I actually thought I was running out of gas.

I was driving down the road, when the car started sputtering. The gas tank said it was half full, but it certainly felt like I was running out of gas.

Not believing my gas gauge, I reached past the steering wheel and flicked the plastic window in front of the gas gauge to see if it was stuck.

I did it again.

At this point, the gas needle broke off and landed on the inside of the dash behind the window. 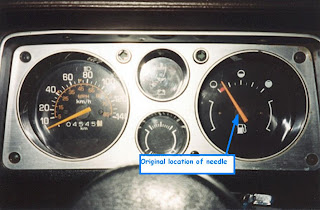 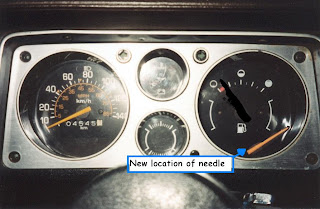 I sat there, staring dumbfounded, at the dislodged fuel needle. What kind of quality assurance people has Chevy employed when the simple act of flicking my dashboard with my index finger can actually break part of it?

This is why I buy foreign.

Gas gauge broken, this marked the start of all my future travelling adventures asking “how much gas do I have in the Chevette?” and “…do I think I’ll make it?”

Every commute to college was a crap shoot.

With broken gas gauge and a continually sputtering car, I would drive with one of my friends the 35 miles each way to school in the morning. Sometimes, my car would simply start sputtering at stop lights and would eventually die until I restarted it.

I found that the only way to fix this BEFORE it died, was to stop and restart it as soon as I felt the car sputtering.

As soon as I started to feel my tiny little crudmobile shake and sputter, I would quickly shut the ignition and fire it back up. A pain, yes…but it worked…for a while.

You see, one afternoon my friend and I were coming home from school on the highway, doing about 50 (top speed in this car). 50 mph in a Chevy Chevette actually sounds like NASCAR when you’re inside it. Now that I think about it, it probably explains why I really can’t hear anything and may or may not be a contributing factor to my erectile dysfunction. I’m just throwing that out there as a possible explanation in case someday I want to sue Chevy.

Back to the commute:

It had just snowed a few days before, and the highway was piled on the sides with 4-foot snowbanks.

It was then that I felt it. The car started…shaking…

Here I am, on a 2-lane highway surrounded by snow drifts, doing top speed in a tiny little deathmobile and it was about to stall out on me.

The first thing that came to mind, was to shut the car off and turn it back on.

So I reached down, grabbed the key, and shut the car off.

At the exact moment that I clicked the key to the “OFF” position, I knew I did something wrong.

I only remember my friend faintly looking at me as I was reaching down to shut it off and starting to say, “What are you….?”

Mind you…I’m on the highway doing 50 miles per hour.

It’s at this point, with the car off, that the wonderful little device known as the “Steering Wheel Lock” kicked in.

With the car no longer aimed straight ahead and now locked into it’s new trajectory, we immediately shot off the side of the highway…and straight into a snowbank…doing 50 miles an hour. 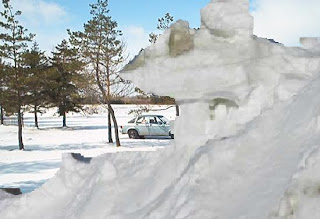 I can only imagine what this looked like from behind.

A perfectly straight road…plowed…clear blue skies. And the car in front takes a sharp right hand turn for no apparent reason and crashes into a pile of snow.

Snow everywhere…my face implanted in my cracked red vinyl steering wheel. There were no airbags back then but, even if there were, my guess is it would have waited until we were done crashing to explode in my face because my Chevette was clearly an asshole.

I sat up and looked at the entire front end of my car buried in the snow.

And then felt the swift smack on the back of my head from my buddy in the passenger seat.

And that bitch started right up and drove home without a single other blip. Not a sputter. Not a hiccup. In retrospect, I think the car probably thought I was teaching it a lesson. Like when a dog poops and you shove his nose in it but this time it was my car starting to stall so I, you know, drove it directly into a snowbank at highway speeds.

The Chevette never started again, and was towed from my house at my expense shortly thereafter.

But I kept the gas gauge needle just to spite it. 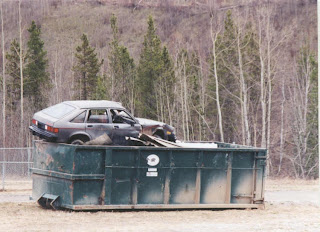