Before I start this post I need to add a disclaimer here that when I told my ex-wife I was writing this post, she made me promise that I would also sufficiently shit on the company that spawned it.

I agreed, mainly because it’s funny and also because this company sucks ass, as you will see in a moment.

Now I can continue.

My entire family is a huge Walking Dead fan. Even my kids who have honestly never really watched an episode. If you’re also one of these people, this post MAY go over your head but I have a hunch you’ll know who I’m talking about anyway.

The most recent, violent character to appear on the show is a guy named Negan. My wife is in love with Negan because he is played by Jeffrey Dean Morgan: 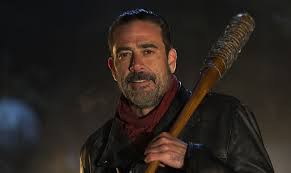 I actually asked her to read this before I posted it and she just slid right off the chair so, yes, it’s really annoying that they got this guy who all the women love to play such an asshole.

My ex got my son, who is mature beyond his years at age 13, this Negan shirt after seeing it on the internet at a store called “TeeChip.com.” 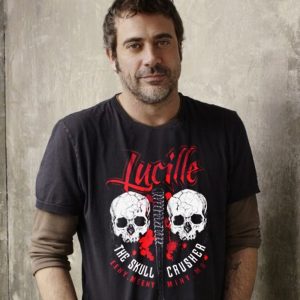 If my wife slips off the chair one more time she’s really going to hurt herself.

For those TWD fans, you can see there is Lucille (his bat) in the middle, surrounded by two skulls (SPOILER ALERT) and his signature phrase, “Eeny, Meeny, Miny, Mo” which he says while trying to pick someone to beat to death.

My ex thought this was cool so she ordered it for my son.

It wasn’t so cool when it arrived.

Here is a side-by-side comparison of what the shirt was supposed to look like, versus what it showed up looking like: 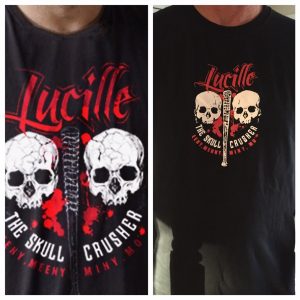 Ummmm. Thanks for the logo?

The graphic is about 3 inches in diameter.

But that’s not the best part. You know that “Eeny, Meeny, Miny, Mo” saying?

Here’s what the logo says on the shirt that arrived:

What in the actual fuck.

My ex-wife was livid. The shirt wasn’t cheap.

She called TeeChip and demanded a refund. They rejected her emails and stopped forwarding her calls for customer service. Eventually they told her NO REFUNDS but they’ll replace the shirt. As you can imagine, she could hardly contain her excitement.

So, yes, TeeChip sucks ass and should probably have Lucille visit their website.

But, then, a bright spot on the horizon appeared.

My son, you see, is effing hysterical.

The kid is so funny that he makes me jealous sometimes.

He decided to take this new, unimproved, saying of Negan and apply it to the most harrowing scene in the history of television.

TeeChip.com – avoid those bastards if you can.

Use another site to order your stuff from. Which one? I don’t know.

Maybe use the “eeny, menny, miny, mo” method to choose.