Everyone knows that one of the greatest joys of parenting is being able to embarrass your child in public.

I take great pride in making my children as uncomfortable as possible as often as possible because it better prepares them for being able to handle awkward situations later in life.

The other night was no exception.

My son, Cameron, had an 8th Grade band concert. He plays drums in the school band and is actually a very good player. Unfortunately, the band doesn’t play Judas Priest or Iron Maiden songs so he very rarely gets to showcase his true talent.

Until this last show.

You see, he was given gong duty.

He was pretty excited, as you can well imagine. Banging a gong is a huge responsibility, as once noted by that band, T. Rex.

Needless to say, he nailed it.

His first hit of the gong was so loud that you could visibly see at least 10 other band members and an old man in the 5th aisle poop their pants. Other than that, it was pretty flawless.

But, as I was sitting in the audience and thumbing through my concert program, I noticed that there was a page on the back with a big blank section that said:

“LEAVE A SPECIAL MESSAGE FOR YOUR CHILD AND WE WILL READ IT DURING CLASS.”

So I wrote Cam a note about his performance, and then dropped it in the comments box. Here is the note:

OH. Oh he is going to kill me.

Today, at around 1 PM. I got the following text message from him during school: 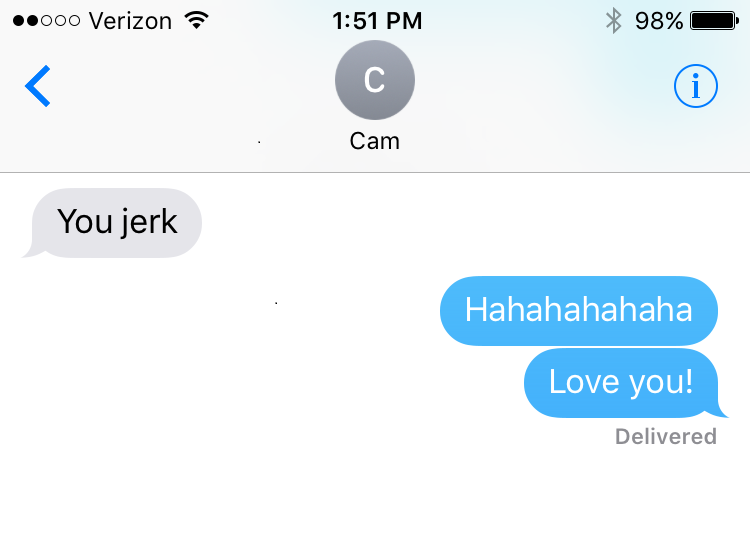