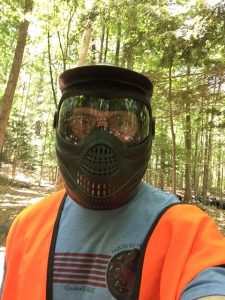 My son is turning 13 this year, so instead of getting him a cross-dressing hooker like my dad did I decided to do something that he’d think was fun and not emotionally scarring to the point where he would be afraid to touch a boob for 20 more years.

I settled on a friend party for him and 7 of his buddies to go play Paintball at a facility about an hour away.

If you’re not familiar with paintball, it’s essentially guerrilla warfare in the woods using compressed-air-powered guns that shoot balls of paint at 14 million feet per second. If one of these paintballs hits you, it explodes through your body – destroying tissue, muscle and bone – leaving you crippled on the ground and covered in paint.

I could not think of a cooler way to welcome his teenage years.

I booked the party and my ex-wife and I headed up with 8 boys in separate cars to the paintball place. Prior to leaving, we had to advise the parents that their children should wear “comfortable clothing” and “preferably long sleeve shirts and pants” because, according to the website, “paintballs hurt like a motherfucker.”

I may be paraphrasing.

I advised the boys to wear the same, though, based on my ONE experience playing paintball for my bachelor party back in 1995.

Back then, paintball was just a bunch of guys throwing cans of paint at each other because guns hadn’t been invented yet. I do, though, remember being hit in the head and face and almost blacking out, as well as being asleep at 4 in the afternoon because even back then cardio really wasn’t my thing.

Also, why my ‘Best Man’ chose to take me out to get shot instead of, you know, getting me a cross-dressing hooker is beyond me. Although, now that I’m thinking back at it, I’d probably still be hesitant on touching boobs right now so THANKS, ERIC!

Boys in tow, we arrived at the field and checked into the field house. The boys were outfitted with guns and full face masks which was a big step up in protective gear from the monacle I had to wear back when I played.

The boys were given a field marshal who would ref all their games and – poof – off they disappeared into the woods, leaving my ex-wife and I to sit amongst the..um…

If you’ve never been to paintball, I can tell you that I now know what the guys who eat alone in the cafeteria wearing Jurassic Park t-shirts and mumbling to themselves do on weekends. Also, adult males who have mohawks.

The adults that are there to play paintball are a different breed altogether. It’s like being in Rambo-4D and the “D” stands for “Damn these people take this way too seriously.”

– Camouflage pants
– Camouflage shirts
– Bandanas
– Headbands
– One guy had a mohawk
– One guy walked by us and exclaimed that he had named his gun “Big Bertha.” That’s right. HE NAMED HIS PAINTBALL GUN. We did not ask him for this information, yet he offered it voluntarily because it was probably the only time he ever talked to people who were clearly not freaky about this shit

Most of the guys had some sort of ammunition belt that they wore to refill their guns during the game. I found this amusing because all the paintball refill containers looked like this:

After the first game, I was pretty sure 3 of the 8 boys were going to tap out.

The low impact paintball was supposed to be HALF the speed of regular paintball and hurt less.

The boys all came back after the first game and began showing off their trophy welts. Each boy had roughly two spots on them the size of a quarter that looked like giant mosquito bites and pretty much every one of the boys looked at me like “WHAT THE FUCK, MR. LACROIX, YOU SAID THIS WOULDN’T HURT SO MUCH. YOU DINK.”

So much for low impact.

It was here that I became very thankful that I had the parents sign waiver forms because I did not want to be sued over this crap and, honestly, I have $5 in my savings account. I guess what I’m saying here is, “Please buy my books.”

The boys would eventually go out and back for 6 different games – each on a different field – and then come back and be, like, “CAN WE BE DONE NOW” but I paid for 1,000 rounds of ammunition a piece so, no, you have to go back out there and kill each other. When you pay for your own paintball you can quit whenever you want but for right now you’re on my dime so suck it up and get out there and I’m sorry you were hit in the esophagus 4 times in a row please don’t tell your mother.

Hot, tired and thirsty we gathered up the minions and headed home. I know they were all in pain, but the ride – just under an hour – with the boys was filled with them talking about the games and what each person or team did and how awesome it was. Sweet.

Although, I hope they didn’t think it was TOO awesome.