It’s no secret that Halloween is one of my favorite holidays.

I usually say that Christmas is my favorite holiday because I just love giving presents out, but then I have to put up decorations and lights and then the credit card bills come so after all is said and done, I think I like Halloween the best.

Halloween in New England, though, is a bit different than other parts of the country. Mainly this is because we have the city of Salem, Massachusetts to go check out (which is wicked awesome) during the month of October. It’s a completely different world and you get to take cool pictures like this with your family and Nosferatu: 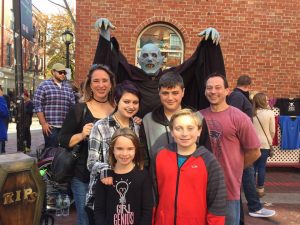 Another huge difference with Halloween in New England versus everywhere else is that it’s usually freezing outside.

This means that costumes like “Sexy Wizard” and “Sexy Nun” and “Sexy Wizard Nun” don’t sell very well because we all have to wear snowsuits to go trick-or-treating because it’s 40 degrees out by 6 PM. Most people usually go as “Sexy Snowmobile Person” because it’s the only way to stay warm and not die of frostbite while attempting to collect Butterfingers from strangers.

That all said, I love Halloween and dressing up.

My daughter and her boyfriend made up their own costumes as Bonnie and Clyde, and put everything together from clothes found at the Salvation Army Thrift Store and spent a total of, like, $15 on both outfits. Look how awesome this came out: 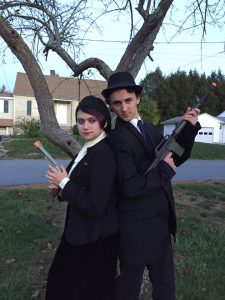 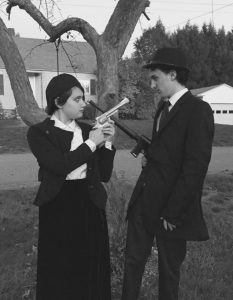 My son, on the other hand, went full Pope. Also, every picture he took that night has him doing this pose. Here he is with my daughter: 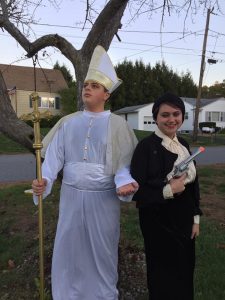 We are all so going to Hell.

My stepdaughter – in a complete bout of irony – went with an angel costume and my stepson pieced together a costume of a demon’s cape and a smiley-face emoji mask. The finished ensemble was basically the Walmart mascot as a serial killer. 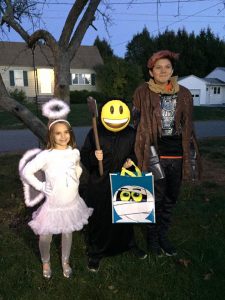 What did I go as?

Well, if you’re a fan of The Walking Dead, then you know who this is.

If you don’t, then congratulations on not owning a television or – if you do – not watching good shows. I hope you’re enjoying Two Broke Girls while living in your bubble house.

I made my own barbed-wire baseball bat using a real baseball bat and pipe cleaners. I already had the leather jacket and red scarf because I’m into bondage, duh.

I can’t grow a beard for the life of me, so I had to use fireplace ash and white powder makeup to finish it off. My stepson’s giant 11-year old friend actually had more facial hair than I did. It takes me roughly 20 years to grow facial hair and when it finally comes in a lot of people tell me to go to the doctor because it looks like mange.

Anyway, here’s how it ended up: 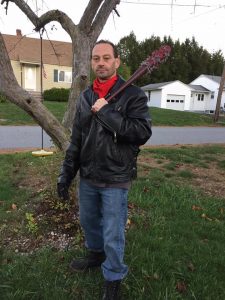 Then I took one with my Pope and Bonnie: 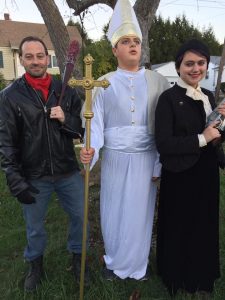 OMG there is that goddamn Pope pose again.

Then when we went out trick-or-treating my wife was able to snap this pretty cool one: 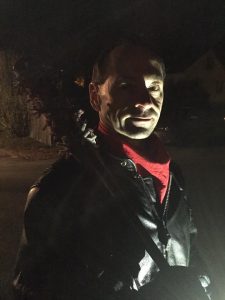 Speaking of my wife. Here I am all Negan’d out with my sexy little devil: 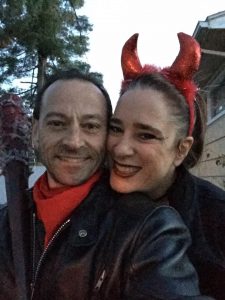 If you’re wondering what happened to her dildo-looking devil tail, let’s just say that my leather jacket and scarf didn’t get thrown back into the closet that night.