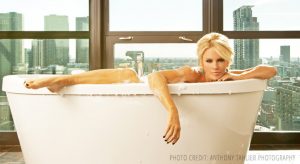 At 10:20 AM on Thursday, June 15th (which happens to be my wife’s birthday SHOUT OUT TO MY HOT WIFE HEYOOOOOOO), I called into The Jenny McCarthy Show on SIRIUS XM Radio to talk about The Vasectomy Diaries.

I don’t think I’ve ever been so nervous.

Now, keep in mind that waaaaay back in 2012, Jenny was gracious enough to read and give me a cover quote for Things Go Wrong for Me – my very first book and quite easily my filthiest and swear-filled tome to date. So, me and Jenny go waaaaay back even though she probably has no idea about the things I still do to her 1993 Playboy issue that currently resides in my nightstand drawer.

I’ve said too much.

Then Jenny picked up, and introduced me. The interview began.

And it was awesome.

She was funny and asked all the right questions and I tried to answer the best I could without puking all over myself because of nerves.

I was given an audio file of the show, so – just in case you missed it – you can listen in. It’s only about 9 minutes long, so roughly three times as long as having sex with me.

Give it a listen. Let me know what you think!

If you haven’t bought The Vasectomy Diaries – or any of my books, you sonofabitch – you can go grab them right here!

Now, excuse me, I still have to throw up from nerves.