WARNING: If you are sensitive to bouts of blasphemy then you should probably skip this post. Also, why are you here? Are you lost?

I’m not sure when it all started, but my family never puts a normal angel or star or anything on our Christmas tree.

I had never heard of this until the first year when I went to my (now) ex-wife’s parent’s house back when we were just dating. Her mom and dad had just finished putting up their Christmas tree.

As I walked into the house, I saw the tree – in all it’s artificiality – standing majestically in the corner of the living room.

There, perched at the very top, was a great big Yoda. 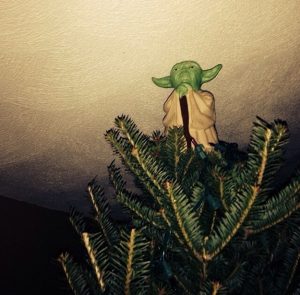 It was honestly the funniest thing I had ever seen.

My parents were pretty religious so every year we had an angel or a star or an angel with a star sitting on top of the tree and OHMYGOD I FELL ASLEEP 4 TIMES WHILE WRITING THAT.

Snoozefest. Angels are a snoozefest.

No. The answer is no.

When I first got married, we used a Santa hat as our tree topper.

Classy yet not an angel, a Santa hat tree-topper showed that, yeah, we were into Christmas but primarily only for the gifts.

Then I had children, and everything changed.

Once my kids started getting older, decorating the tree turned into an exercise in just screaming and re-positioning everything. If you enjoy every ornament placed on your tree in a spot that is roughly one square foot in area and not a single ornament is hung at a height above 3 feet, having kids decorate the tree is right for you.

Of course you spend most of your time saying things like, “That’s a good spot! But maybe let’s put it here,” or “Ooooh good one, but maybe it shouldn’t go on the same branch as these 15 other ornaments you put on,” or “OKAY GO WATCH CARTOONS MOM AND I ARE GOING TO FINISH THIS.”

About the time the kids started developing their own senses of humor, we started pretty much just scrounging around to find whatever we could to put on the top of the tree instead of the Santa hat.

Here are a few pictures I found of our tree tops over the last few years:

Nothing quite says “MERRY CHRISTMAS” like a googly-eyed squid sitting on top of the tree. In our defense, it actually looks pretty good up there because it’s tentacles are essentially their own ornaments because they have glitter on them. This seemed like a win-win.

The following year, we did this:

That is Chef Polcari, my son’s aptly named hand puppet. Why he has a hand puppet, I’m not sure, but he’s really pretty awesome. Adding to this awesomeness is the fact that he has a sweet 70’s porn/Italian guy mustache and his right arm is perpetually giving you a ‘thumbs up.’ You can almost hear him up there with his thick Italian accent saying something like, “HEY-o! Have-a you-self a very merry Christmas, ay! If-a you don’t, I come-a back and break-a both you legs!”

Then, well, this year.

Originally we were going to put a giant smiley face on top from my stepson’s Halloween costume, but then as I was walking by his room, I spotted something even more perfect:

Again, why my children have these things shouldn’t be a surprise to anyone because they live with me. So, having a hat that is essentially a giant pile of shit is pretty much the norm in my household.

We took a vote on the smiley face versus the poop and of course the poop won by unanimous decision.

Also, if you look closely at the picture of the tree top you can see we also have a stunning Cthulhu ornament hung right below it.

I’m sure there are people reading this who are getting all angry that we’ve taken the meaning of Christmas and turned it into a holiday of blasphemy (I’ve just decided that’s what I’m going to name my band, “Holiday of Blasphemy”), but I can assure you that the kids also created a section of all religious ornaments for the tree this year.

They call it the “Jesus Corner” and it occupies one branch on the very bottom of the tree.

Okay. Maybe you have a point.