Ah. Here we are again, finding ourselves amidst yet another “Things I Learned” post containing mostly things I wish I didn’t know.

Maybe these should be named “I Never Learn from Things I’ve Learned” because I seriously keep doing things that end up with some sort of disaster element in them.

This is why my first book is titled, “Things Go Wrong for Me.” This is my life.

As I write this post, my teenage daughter is on the verge of turning 16 years old.

This means that she thinks she has the worldly knowledge of a 70-year old inside the body of a 15 year old with the attitude of a 3 year old who just had it’s toy taken away.

If you’re not a parent, this is about as eloquent as the description of a teenager gets.

When my daughter was very young, I began to instill in her the love of heavy metal music. I was a teenager in the 80’s so I grew up on Judas Priest and Iron Maiden and Guns N Roses before Axl turned into the ginger equivalent of the Pillsbury Dough Boy and the other 78 million hair bands that came out within a 3 week span of 1984 before Nirvana showed up and convinced everyone that musicians should wear flannel.

It was a dark time for us who liked to rock.

So when my daughter was born, I told myself there was no way I was going to let her grow up listening to Ariana Grande (I just had to Google if that had one ‘n’ or two) or Britney Spears or any hip hop bullshit.

Why? Because if she listened to it, that meant I also had to listen to it and no thank you.

So her conversion to a metal head started at the very early stages of her life. I started her off slowly by singing lullabies to her by just changing the tone of Disturbed lyrics.

Come on get down with the sickness.”

Today, at 15, my daughter is a straight-up metal chick with purple hair who plays a Tony Iommi left-handed (yes, she’s a lefty) Epiphone guitar while she plays in a band that has appeared at Hard Rock Cafe in Boston.

So as her 16th birthday approached, I found myself scrambling to get her the perfect gift. Sixteen only comes around once, so it had to be good.

That’s when I saw this: 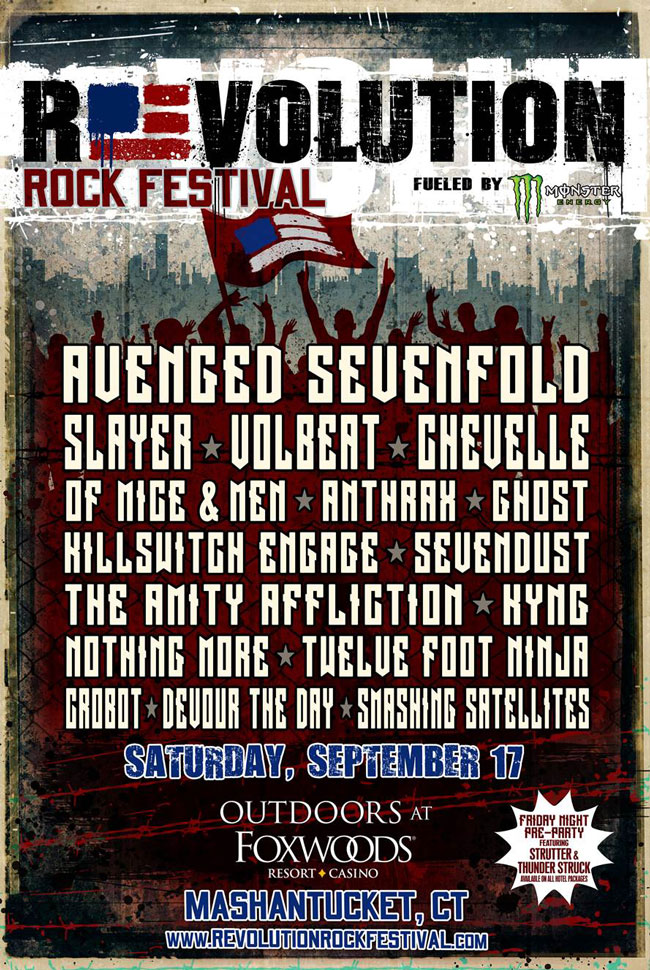 The reason for my OMGOMGOMGOMG was because of that very first band listed.

Avenged Sevenfold (hereafter known as A7X) is my daughter’s favorite band on the planet. ON THE PLANET. She has A7X pillowcases and sheets and posters and stickers all over her guitar. She knows the lyrics to every song. She knows everything about every band member.

This is probably how your kids are with, like, One Direction or some other stupid boy band except, you know, this band is awesome and not currently discovering how their bodies are changing during puberty.

So I bought the tickets.

And I gave her the surprise of them 5 days earlier than her actual birthday because that’s when the show was. This made sense to me. Giving them to her after would be kind of stupid. 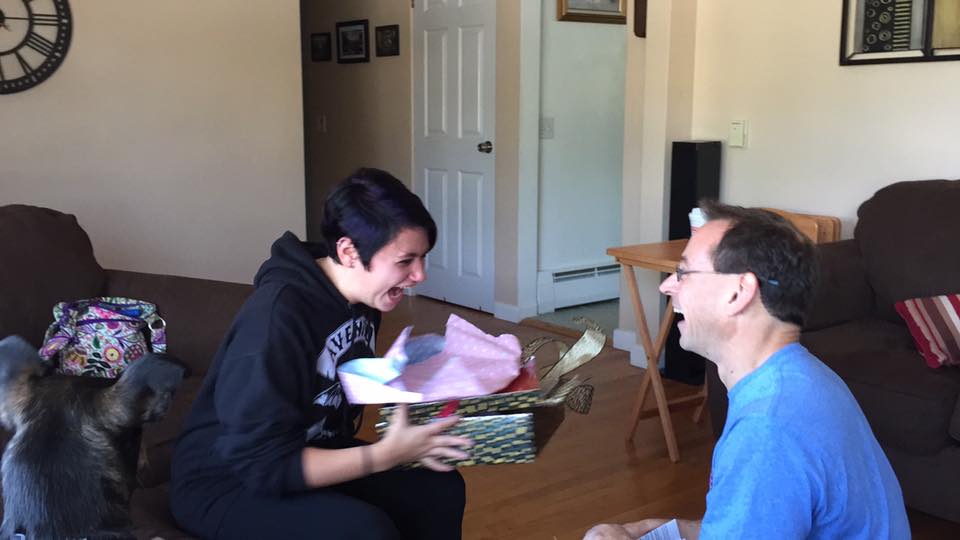 As you can clearly see, she clearly hated it.

We immediately hopped in the car and drove 2 hours to Connecticut. Mind you, I had not been to an outdoor rock festival since I was a teenager, and back then there were no such things as mosh pits or crowd surfing or concert shirts that sold for less than $923.

Here’s what I learned:

Please keep in mind I am very okay with this discovery.

All the women working at the bars and drink stands and even a pizza place all had on black leather corsets and fishnet stockings.

I don’t know why this was, exactly, but I’m seriously fine with this as a man. I’m sure some feminist out there is like “OHMYGOD THAT OBJECTIFIES WOMEN” but yay for objectifying women in this case because even when you’re ugly a leather corset and fishnet stocking ensemble does wonders for your sales, I’m sure.

So I went up to one of these women to get some waters for my daughter and I (yes, water) and the following ensued:

Waitress: I get that a lot.

Me [putting tongue back in mouth]: Two waters, please.

Waitress: You going to be drinking any alcohol?

Waitress: Here, let me put this wristband on you just in case.

Waitress: You have wisdom in your eyes.

So of course I paid $6 for waters and gave her a $37 tip because even the wisdom in my eyes thinks with my penis.

This being the first time my daughter was seeing A7X, she of course wanted to get front row.

This means that we had to start working our way up towards the front of the stage around 3 PM and continue moving forward until the band came on at 9:30 PM.

Granted, other bands like Anthrax and Chevelle and – my personal new favorite – Volbeat played but seriously being on your feet for 6-1/2 hours is a killer.

Oh, I also found this out:

Seriously. This changes EVERYTHING.

Okay, back to the mosh pits.

So as we are working our way towards the front of the stage, a mosh pit breaks out.

Keep in mind I always get seats to the side of a venue when we go to concerts because I never want to be anywhere near one of these fucking things. It is, essentially, a circle pushed open in the middle of the crowd that has anywhere from 5 to 15 guys who seriously need to get laid or take karate because they are just fucked up dipshits with no other place to dump their testosterone other than in the pages of TITS Magazine and probably have clear confusion about their sexual preferences because all they want to do is mash with other shirtless men.

This thing literally opened up right behind us, putting me and my tiny 15-year old girl on the edge of a circle of guys who are the main consumers of Affliction and TapOut shirts hopped up on Red Bull.

Fists were flying. One fat bald guy was throwing kicks. There was fat and baldness and testosterone shooting across the crowd. It was disgusting and smelled like the underwear section of Walmart on a hot day.

There was even a pretty hot chick in there which totally threw off my theory about the guy-only thing until I saw her spit and grab her crotch and I was, like, “Ohhhhh.”

So not only am I now trying to shield my daughter from these dickheads, but I am also trying to make sure that I don’t get hit by one of these fuckwads because I would seriously take out a knee.

What these people don’t realize – or probably do but, hey, there’s a need to show random strangers how tough I am, I guess – is that the rest of the crowd is pretty packed in. What happens, then, is that they run into the edge of the crowd in their frenzy thus pushing the entire thing back. People are falling over. People are getting crushed. People are getting smacked. And I’m just there on the side hoping one of them dies because this is stupid.

No one died in the mosh pit so that sucked.

Go ahead, moshers. Defend yourselves. You can talk about camaraderie and getting out your aggression and shit as much as you want, doesn’t change the fact that I think you’re a moron.

[gets spit on by woman grabbing her crotch and knocked unconscious]

If you like kicking people in the head, crowd surf

Right on the heels of the mosh pitters (trademark pending) are the crowd surfers.

Most of these people have no real say in the matter other than someone going “Hey, you wanna go up?” and the person goes, “uhhh” and then next thing you know they’re over everyone’s head being pushed towards the stage screaming things like, “WHEEE” and “DON’T DROP ME” and “LET GO OF MY LEFT TESTICLE” and “OHNO MY SUNGLASSES/WALLET/PHONE” because literally they are losing everything out of their pockets and stuff.

Now, my daughter and I are both barely over 5 feet tall, so we really couldn’t push these people forward, however I was just tall enough to get kicked in the head 43 times by boots and shoes and my daughter was pushed to the ground a few times while the crowd tried to move these people forward. Luckily we were able to get a few punches in so that made us feel better.

I actually took one of these surfers right off the back of the head when he fell on top of me from behind. There is nothing that says “fun concert experience” like getting kicked in the face and then getting whiplash, let me tell you.

People can be awesome

At one point, my daughter and I had reached an area about 4 rows from the front. But by this time it was only an hour to showtime and people were so packed in there was no way we were moving any closer. My daughter was crushed.

Literally. She was crushed.

We found we could not really breathe and at one point my own foot popped up in front of my face.

I looked down at my daughter and she was being smothered. Literally being crushed by the crowd of people which was exacerbated by the random appearance of mosh pits and crowd surfers. We made a beeline for the side railing at the middle of the stage that created an alley to the lighting booth in the back and separated the crowd into two.

We made it to the edge and I assumed a box position by putting my daughter between my arms while I held onto the railing. I, in turn, was beaten about the head and neck by the thousands of people around me. But, hey, parenting is about sacrifices, right?

And that’s when the good samaritan appeared.

A man in the very front corner of the railing across from us yelled, “Hey! It’s so much better over here!”

They had no mosh pit.

They barely had crowd surfers.

He had a spot, right in front of him beside his wife where my daughter could fit.

Me: Can she fit in there?

I grabbed a security guard and asked if he could take my daughter over the rail because I feared for her safety. The security man pulled her over and off went my teen, reappearing on the other side of the crowd, right in the front corner, protected by this amazing guy.

He saved the show for her. Here is my daughter across from me, at her new location with this guy behind her. If you know this guy, please let me know how to find him. He completely saved this experience for me and – more importantly – for her. Look how happy she is OMG.

Kicks in the head and crushed ribs are totally worth it, sometimes

When Avenged Sevenfold finally hit the stage at 9:30 PM, it was one of the greatest moments of my life as a dad.

I couldn’t be next to her (I was stuck on the crushing mosh-pit-surfer-side of the place), but I could watch her reaction. You can actually watch it right here, because this video was shot by her from her phone.

If you listen closely, you might be able to hear her screaming:

Need to pee like seriously badly? Not really OHMYGOD MY BLADDER IS AMAZING ALL OF A SUDDEN.

Feeling like king of the world for making your daughter this happy? Oh yeah. Check.

I can’t wait for the next one.

But I’m totally wearing a helmet.